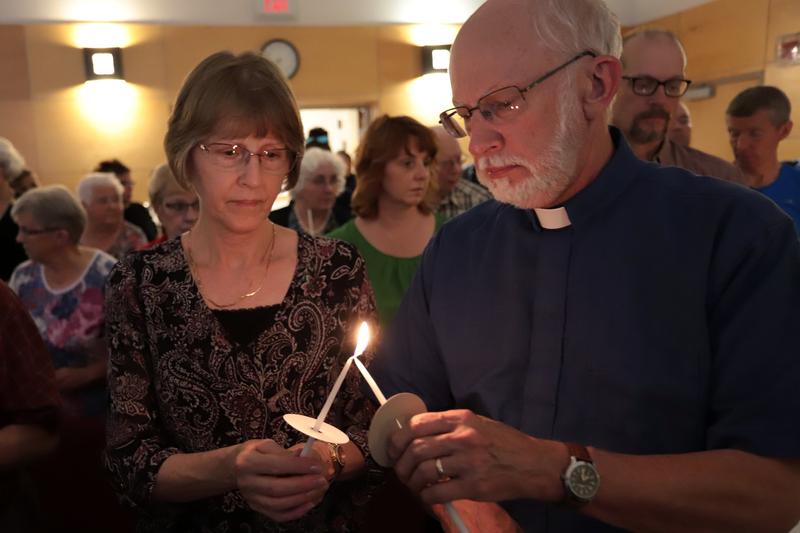 FREDERICTON, New Brunswick (Reuters) – Four people, including two police officers, were killed in a shooting in eastern Canada on Friday in the latest eruption of gun violence across the country that has led to calls for weapons bans in cities.

Police in Fredericton, a city of about 56,000 that is the capital of the province of New Brunswick, said a suspect was in custody and was being treated for serious injuries. A local health official said multiple shooting victims were being treated at one hospital.

Witnesses said the shooting occurred at an apartment complex, and local media showed emergency vehicles converging on a tree-lined residential street. Nearby facilities were closed and authorities imposed a lockdown for residents before issuing an all-clear message.

Officials identified the slain officers as Sara Mae Burns, 43, and Lawrence Robb Costello, 45. They did not release the names of the two civilians who were killed, and said only that the suspect was a 48-year-old Fredericton man. They did not release information about a possible motive or the weapon.

“It was scary,” said Marlene Weaver, who was in bed on Friday morning when she heard shots. “It takes you back to the shooting in Moncton.”

She was referring to a 2014 incident in which three Royal Canadian Mounted Police (RCMP) officers were killed and two wounded in Moncton, New Brunswick, about 195 km (121 miles) from Fredericton in one of the worst incidents of its kind in Canada.

Friday’s shooting occurred three weeks after a gunman walked down a busy Toronto street, killing two people and wounding 13 before killing himself.

“We’ll see where this investigation leads in terms of what exactly happened, who did it, what was the motivation for doing it and the instruments of destruction that were used,” he said.

“But broadly speaking, the government of Canada is obviously taking the issue of gun violence very seriously.”

Gun laws in Canada are stricter than in the United States but a proliferation of weapons has led to an increase in gun-related crimes in recent years.

New Brunswick had three homicide shootings in the entire year of 2016, according to Statistics Canada.

“Awful news coming out of Fredericton,” Canadian Prime Minister Justin Trudeau said on Twitter. “My heart goes out to everyone affected by this morning’s shooting. We’re following the situation closely.”

“THIS MORNING I HEARD THOSE NOISES”

Fredericton police said their officers responded to a report of shots fired early on Friday morning and found two victims on the ground.

Burns, who had two years on the force and had spent two years as an auxiliary officer, had three children, Chief Leanne Fitch told reporters. Costello was a 20-year veteran, and left behind four children.

Jeff Magnussen, general manager of a golf course near the site of the shooting, said by phone that he heard multiple gunshots before 8 a.m. local time.

“You hear a lot about gun violence in the United States,” he said, “but this morning when I heard those noises, what’s starting to sink in is that those noises were people losing their lives. To have it happen so close to us is shocking. Now we’re becoming the story that nobody wants to hear.”

Scott Hill said he was walking his dog by a golf course when an employee told him to get inside because of the shooter. He said he could still hear sporadic gunfire coming from the apartment complex two hours later, when he was at the office of his property development agency.

Participants light candles in a vigil at the St. John the Evangelist Anglican Church in Fredericton for the fallen in a fatal shooting in Fredericton, New Brunswick, Canada, August 10, 2018. REUTERS/Dan Culberson

In the wake of the Toronto bloodshed last month, the city council voted overwhelmingly to urge the federal government, which has jurisdiction over gun laws, to ban the sale of handguns in the city.

“Why does anyone in this city need to have a gun at all?” Toronto Mayor John Tory said. Canada’s largest city has had 241 shooting incidents this year, resulting in 30 deaths, a 30 percent increase in fatalities over the same period last year.

“It’s possible that we could work with the provinces and territories and allow them the authority to designate certain municipalities as places where guns could not be purchased or possessed,” Blair told Reuters.

In 2016 Canada had 0.61 firearm-related homicides per 100,000 people, a 23 percent increase from 2015 and the highest rate since 2005, according to Statistics Canada. For the United States, the University of Washington’s Institute for Health Metrics and Evaluation reported 3.85 deaths per 100,000 that year.

The measures would enhance background checks on people seeking to buy firearms, especially those with a history of violence.

On Thursday, Ontario pledged more money for police and to keep suspects behind bars while they await trial on gun crime charges.