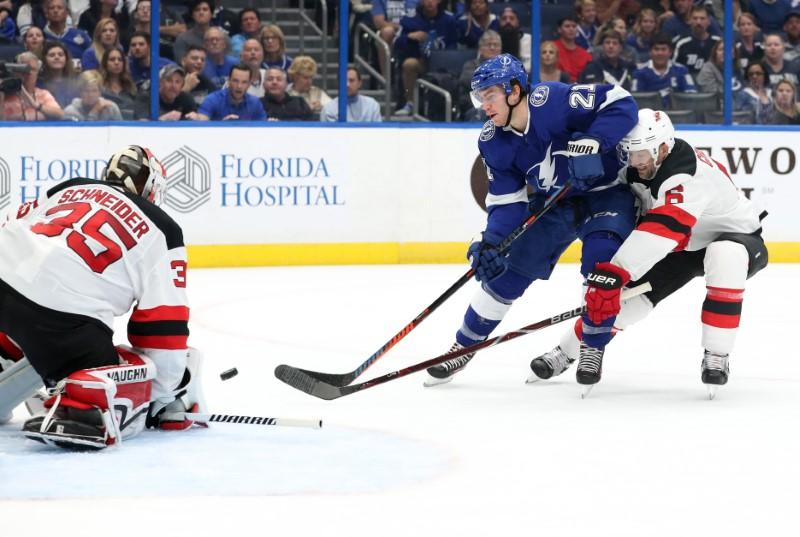 Tampa Bay blitzed visiting New Jersey for the second time in less than a month as four different forwards scored on four of the first seven shots in the Lightning’s 5-2 win over the Devils on Sunday.

The Lightning exploded Friday for three goals in the first 10 minutes of a 4-2 home win over the Chicago Blackhawks, and they bettered that output Sunday, scoring four times in the opening 11:25 against Devils goalie Cory Schneider.

Tampa Bay won the previous meeting against the Devils on Oct. 30 in an 8-3 rout — one of two games this season when the Lightning registered eight goals. On Sunday, Brayden Point scored twice, and Alex Killorn, Tyler Johnson and Cedric Paquette also had goals for the Lightning, who won their third straight.

Defenseman Noah Hanifin scored his first two goals of the season, Mark Jankowski added two goals, and Calgary had three short-handed tallies in a win over Arizona in Glendale, Ariz.

Sean Monahan scored his 13th goal of the year, TJ Brodie had a goal and an assist and Mike Smith made 28 saves for Calgary. Johnny Gaudreau and Mark Giordano each had an assist, giving both 19 for the Flames this season.

Clayton Keller scored an unassisted goal at 13:44 of the third period for the Coyotes, who have lost four in a row and eight of 10. They lost the final four games of a five-game homestand.

Nick Bonino had a goal and an assist, Colton Sissons and Roman Josi had two assists each, and Pekka Rinne made 17 saves for the Predators.

Adam Henrique and Ondrej Kase scored for the Ducks, who opened a five-game road trip after playing 11 of the previous 13 games at home. John Gibson made 28 saves.

With the score tied 2-2 after two periods, Derek Forbort made a great pass to spring Kopitar on a breakaway, and the Kings captain snapped a blocker-side shot into the net at the 4:27 mark of the third period for his seventh goal of the season.

Cal Petersen, who made 32 saves, held strong between the pipes the rest of the way for the Kings — who sit last in the league — before Brown and Matt Luff iced the affair with empty-net goals into final minute. Alex Chiasson scored twice for the Oilers, who got 27 saves from Cam Talbot.