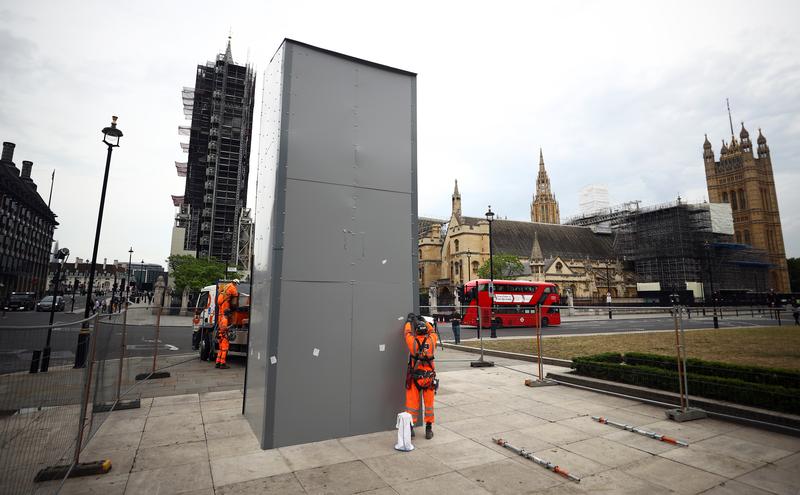 LONDON (Reuters) – Workmen began removing protective hoarding around a statue of Britain’s wartime leader Winston Churchill on Wednesday ahead of a visit from French President Emmanuel Macron, after the monument was covered up during racial equality protests.

London Mayor Sadiq Khan’s office confirmed the uncovering was linked to Macron’s visit, which marks the 80th anniversary of General Charles de Gaulle’s radio address to France after the Nazi invasion in 1940, broadcast from London by the BBC.

The plinth of Churchill’s statue outside parliament was daubed with graffiti that said “Churchill was a racist” during a Black Lives Matter march 10 days ago.

The authorities feared it was at risk of further damage following the toppling of a statue of Edward Colston, a 17th century slave trader, by protesters in Bristol in southwest England.

Prime Minister Boris Johnson, an admirer and biographer of Churchill, said it was “absurd and deplorable” that the monument should have been in any danger.

Churchill expressed racist and anti-Semitic views and critics blame him for denying food to India during the 1943 famine which killed more than 2 million people – aspects of his legacy which some say are not scrutinised enough.